http://www.infowars.com/alien-genetic-takeover-the-end-of-humanity/
This is the latest from the world greatest fear-monger, Alex Jones. Many of his misunderstands about GMO crops can be debunked just by reading this peer to peer report on Jeffrey Smiths claims.
http://academicsreview.org/2010/03/new-site-pushes-peer-reviewed-science-over-misinformation/
I would love to hear your input on this horrible fear- mongering scam to deride the development of several very important industries that are developing and marketing amazing beneficial products.

I really enjoyed the academicsreview.org site. My son's English teacher told me that his class would be doing some writing about the subject of GMOs.
The way he spoke of it I could tell he was an opponent. I asked my son if he would be willing to risk challenging the teacher, and he said he might, so this looks to be a good resource.
Chassy and Tribe are to be commended for their concise, very concise debunking.
Thanks.

As far as Alex Jones goes, I guess we have yet another front in which to do battle. I recall Alex Jones' YK2 night broadcast, which was so over the top with hype he had people running for the hills til dawn broke and they realized the world was going to continue indefinitely. There's been a lot of water under the bridge since then, but Alex hasn't really shown himself able to discern truth any better. He does addict people to fear, gets them literally high and wanting the fix on a consistent basis. Both he and his advertisers know this quite well of course and make money giving the folks what they crave.

I do have a fear that GM modified produce might not have all the studies necessary to determine it's impact on insects (good or bad), and the insects' ability to adapt so quickly to these changes, and might struggle. I am not a field biologist. None-the-less, it is not too far a stretch to assume that because insect adaptation takes many years to acclimate to plant adaptation, that sudden biological changes to a reliant crop might present a problem, immediate (or long-term) to the other insect species that rely on such crops........or the birds and such that rely on those very insects that now may have to adapt quickly.

Corn and soybean are perhaps the largest crops targeted for genetic modification in the US, and rice becoming the (globally) eastern genetically targeted counterpart.
To wade through the scientific lit. regarding these new GM crops, is like searching for the truth among a "who's who" of gov't and business interests.......with opponents to such changes receiving much less research funding.
I don't know the answer/conclusion.......but anyone can see there might be bias, depending who is doing the relevant testing.

The real test is time. The question as to safety is open, and at any point the best way to evaluate is to examine current or past records of ill effects. Can anyone point out any?
S

The use of GM crops can positively impact agricultural
species biodiversity if the GM crops enable the management
of weeds and insect pests in a more specific way
than chemical herbicides and pesticides. In particular, the
adoption of insect-resistant Bt crops, expressing highly
specific Bt proteins, represents an opportunity to replace
broad-spectrum insecticide use. The insecticidal proteins
expressed in Bt crops such as Bt maize and Bt cotton are so
narrow in their activity that they have little or no activity
against non-target organisms. Furthermore, the toxins
are expressed within the plant tissues, minimizing the
exposure of animals that do not feed on the crop plants.
As a consequence, considering the large number of field
studies that have been conducted, few or no differences
have been seen with respect to community structure or
individual species abundances where fields of Bt crops
have been compared with conventional crops that have
not been treated with insecticides. Where they have been
calculated, indices of species diversity and community
structure have not differed significantly for Bt corn
fields compared with untreated conventional corn fields
(e.g. [22–24]) or for Bt cotton fields compared with
conventional cotton fields [25–28]. The only species that
have been observed to be significantly and consistently
less abundant in fields of Bt crops compared with conventional
fields are the target pests and their specific
parasites.
http://www.cof.orst.edu/cof/teach/agbiotox/Other Readings/BiodivGMO-Amman-TrendsBiotech-2005.pdf

I have a fear, but that does not make that fear a reality.
The most talked about documented fear is what happens when the "Roundup Resistent" (RR) crops are sprayed with the Roundup herbicide .....and kill native grasses and plants, but not the target crop.
In all fairness, crop expansion and habit loss not related to GM RR spraying also figures into the results.... 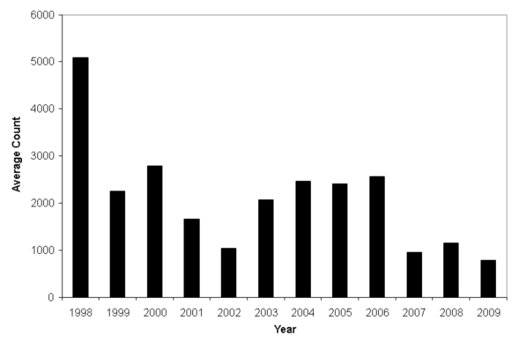 Here's an overview, but from 2002.
http://www.foodsafety.k-state.edu/articles/70/gm_crops_enviro_part1.pdf
.....which may well be an argument against my fears....lol.
In light of the speed of genetic advancement, patience and field-testing may become shorter and shorter, and genetic proposals become faster and faster.

I thought the main fear about RR crops is that feral crop plants become unkillable weeds, possibly in a field of another RR crop.

The 2002 decline in monarchs was documented to be in Mexico during overwintering. 75% died that winter down there.
http://www.fs.fed.us/wildflowers/po...ion_Patterns_Environ_Effects_Pen_Point_MI.pdf
Not sure about the other years, but USFWS says overwintering habitat in MX has declined.

Monarch butterflies lay eggs on milkweed species of plants, other butterflies and moths lay on specific species of plants, ie. corn earworms target corn and similar plants.
If bt corn were so bad that it killed non-targeted species, yet the corn species is the one which is sprayed, why isn't the corn earworm population decimated making sale of bt corn unneccessary? My experience showed that even with the bt corn, some damage occurred, some earworms survived, and there is a risk that those which survived will be resistant individuals. That is why the grower contract I signed when I bought the bt corn seed specified that the corn be mowed down immediately after harvest to reduce the survival of those possibly resistant earworms.

Rather than pick a non-target species known for its beauty such as the monarch, to determine if bt corn is wiping out lepidopterans in general, one should probably look at the populations of corn earworms over time.

Some further research found this fellow who has been doing some informal videos specifically looking for monarchs in the gmo intensive areas of the midwest.
Here he has documented and presents them to some folks who love monarchs and feel he is trying to push an agenda:
http://www.monarchwatch.org/forums/viewtopic.php?f=15&t=2774

Turns out that Paul Cherubini does sell pesticides, but also has a degree in entomology:
http://groups.yahoo.com/group/leps-l/message/8983

He has been giving people fits for years, it seems.
He has a youtube channel:
http://www.youtube.com/user/4af

Thanks for the research, Jay.
I'll look at it when I get home.

I remain open on the subject, and to all points of view, and experience. I am here to learn, as well as help "weed out" any bunk.... (pun).
Cherubini does seem to be well interested in monarch and habitat.....apparently doing more field investigation than many of those who claim he is wrong.

Off topic side note....
I can't get any of my rares species passionflowers to grow to any large size.....the Fliterary butterfly keeps laying it's eggs on them, and I don't have the heart to kill the resulting young caterpillars that feed on the passionflower's leaves.
http://www.flickr.com/photos/flutterbye856/6193163286/
U

There also is a economic aspect to all of this.

Look's like you guy's might get a chance bite into some NON BROWNING APPLES sometime soon.
HHHMMMM Yummy!!!!