Another example of Michael Janitch, aka "Dutchsinse", misidentifying, or perhaps purposefully mislabeling, an obvious release of chaff during a military training excercise.


I'm not sure what he means by this statement: "Key West Naval Air Station at the very center of this RADAR display (where the RADAR is location) is NOT really covered by these aircraft. Thus eliminating “military chaff” over the air station as the “cause” of these long lasting jet plumes."

Does he seem to think that military aircraft release chaff to hide their home base from radar?

Anyways, just as it was in this previous thread, the radar signatures of chaff are fairly obvious to anyone who actually knows what they are looking at.

One of the most useful dual polarization weather radar products available is called "Correlation Coefficient" or just CC. In a nutshell, the higher the value is to +1.0, the more "correlated" the objects in that area are; in other words the more they are alike. Rain and snow bands will appear anywhere from a yellow to an almost pink and have a CC closer to 1. Non-meteorological returns such as birds, bugs....chaff....are not very uniform and so therefore their values as seen on weather radar will typically be less than .7 and appear an almost grey or blue.

Examining the correlation coefficient product from KBYX, the WSR-88D in Key West, again, just like the Las Vegas "spray cloud", we see values of less than .41 and no higher than .73 - indicating a non-uniformity of the objects in that area, something you'd expect to see from irregularly shaped chaff that is flowing and tumbling through the air. 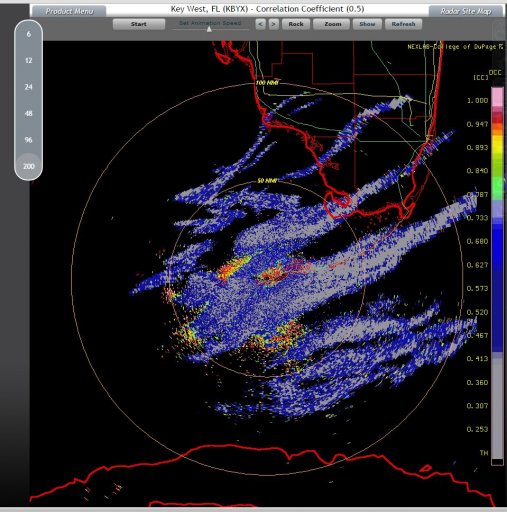 Another useful dual pol product is Differential Reflectivity, or simply abbreviated as ZDR. Differential reflectivity is the ratio of the reflected vertical and horizontal power returns as ZV/ZH.

Chaff is mostly horizontally oriented and slowly falls with respect to air. Turbulence and differential air motion will cause wobbling and the ZDR would be expected to be relatively large.

Examining the ZDR from KBYX, we see indications of scatterers that are largely horizontal in shape - indicated by the dark reds, pinks, whites and purples. Exactly as you would expect to see from chaff that, as stated earlier, is horizontally oriented. 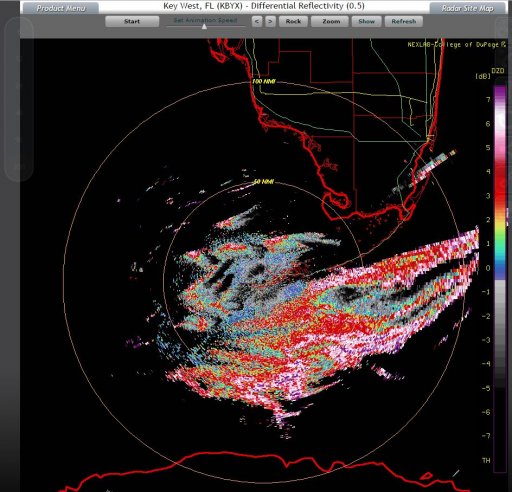 One last product we can look at is the Hydrometeor Classification product. This product from the KBYX weather radar is indicating the returns are non-meteorological returns. The radar is definitely not indicating any type of precipitation, let alone man made "storms"........ 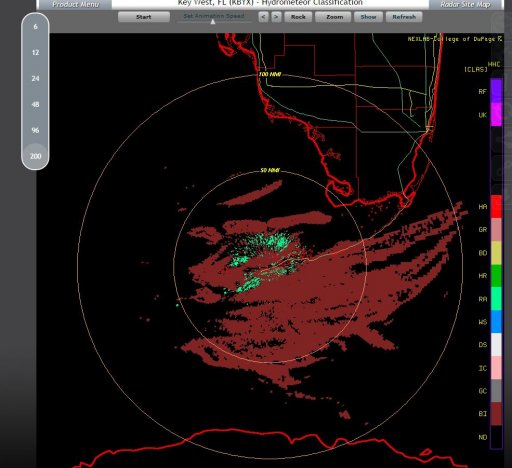 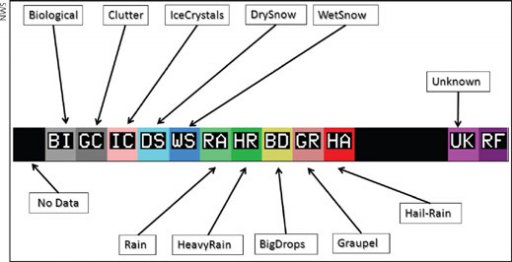 But, as is typical, Dutch heads over to Intellicast or the Weather Channel and uses those sites' faulty weather identification algorithms to "confirm" his findings. Of course those sites are going to label those returns as weather. They don't know any better. And that misidentification of the data was certainly NOT acknowledged as such by the National Weather Service to be an actual storm as he claims. That label that popped up is locally produced by those sites. The NWS does not use terms such as "strong cell"....

Some links to other similar events in south Florida:

He may mean that the aircraft doing the alleged spraying aren't based at Key West.

Further to that, Key West is a major fighter training facility for the USN. The use of chaff there would be routine.

In your opinion, would clouds of metallic nano-particles interfere with the weather radars on airliners? I suspect they would but would like an expert opinion.

TWCobra said:
If I am following an aircraft within 30 miles, I can tilt the antenna and get a solid return from the aircraft without any problem.
Click to expand...

I can also attest that I have done this....when I was on defined "tracks"....and nowadays we have TCAS displays that can show on our "Instrument Panel Screens" (NOT the proper term)....(BECAUSE?? Different airplanes, and different avionics installations will "present" TCAS in some different ways...this is why pilots "learn" every airplane type separately)...PLUS, as mentioned, we can (sometimes, depending on the avionics) ADD the radar info TO that same display screen, and see any "overlap".

I have typed here on this board and mentioned before that I had the ability to use the "WX Radar" (that is "weather radar") to 'paint' an airplane in front and below (or above) us....radar works that way!! It sends out a signal, and ANY "return" that it receives (at light speed, BTW) is thus recorded on the screen, for the pilot to interpret.

(PS? link above....THIS ONE is designed to educate professionals. NOT to appear to "talk-down" to anyone....BUT?)

There is a LOT to learn as a professional pilot.

I've see similar returns for a couple of decades over Central Florida. Usually north of Orlando, and always on clear days with no rain in the forecast for many days. I worked on a couple of systems that provide radar and weather data to air traffic control and general aviation flight planning, so we had feeds from DWR's to assist our development. Whenever we'd see long streaks of high reflectivity (always east/west), we'd check other sources for potential precipitation. In every case, it was chaff from military jets (usually out of Eglin or Jax).

TWCobra said:
Further to that, Key West is a major fighter training facility for the USN. The use of chaff there would be routine.

In your opinion, would clouds of metallic nano-particles interfere with the weather radars on airliners? I suspect they would but would like an expert opinion.
Click to expand...

I would think so. A typical airborne weather radar uses, I believe, a much shorter wavelength (3cm) that a ground based WSR-88D (10cm). This is mostly due to the requirements of a more compact system on an aircraft. Smaller wavelength makes it more sensitive to seeing smaller particles but also more susceptible to its energy being attenuated. They also have a much shorter range for those reasons. But I would think such such particles would be visible on a modern airborne weather radar, at least at close range.

I'm not as familiar with airborne weather radar though. But a real good question!

Dutch made a follow up post again yesterday. I looked at all the doppler products available and saw the same things I saw in the earlier post. Military release of chaff and nothing more. He really is resilient.

And still no storms reported as he claims: 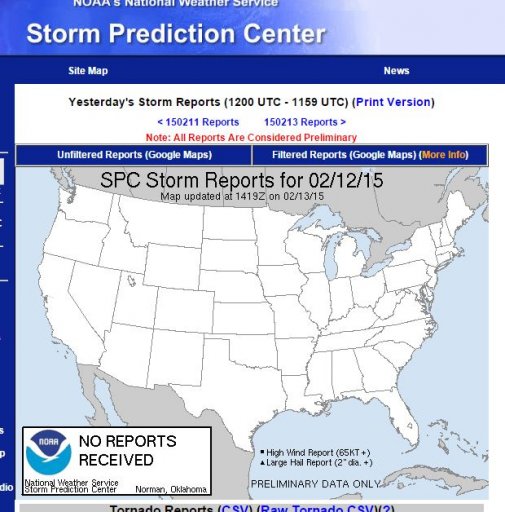 And yet another "event" at the same time as the previous two days and, just as before, it's just chaff.

No updates from Dutch yet though. Interesting that "they" would confine their "spray" operations to the same location and time every day.

The Correlation Coefficient of today's imagery. CC is explained in detail in a previous post on this thread. 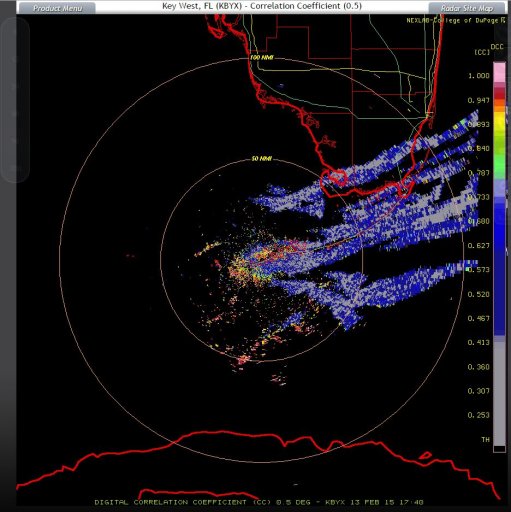 From the US Inventory of Ranges. This is a heavy use USN air range which includes an MOA. 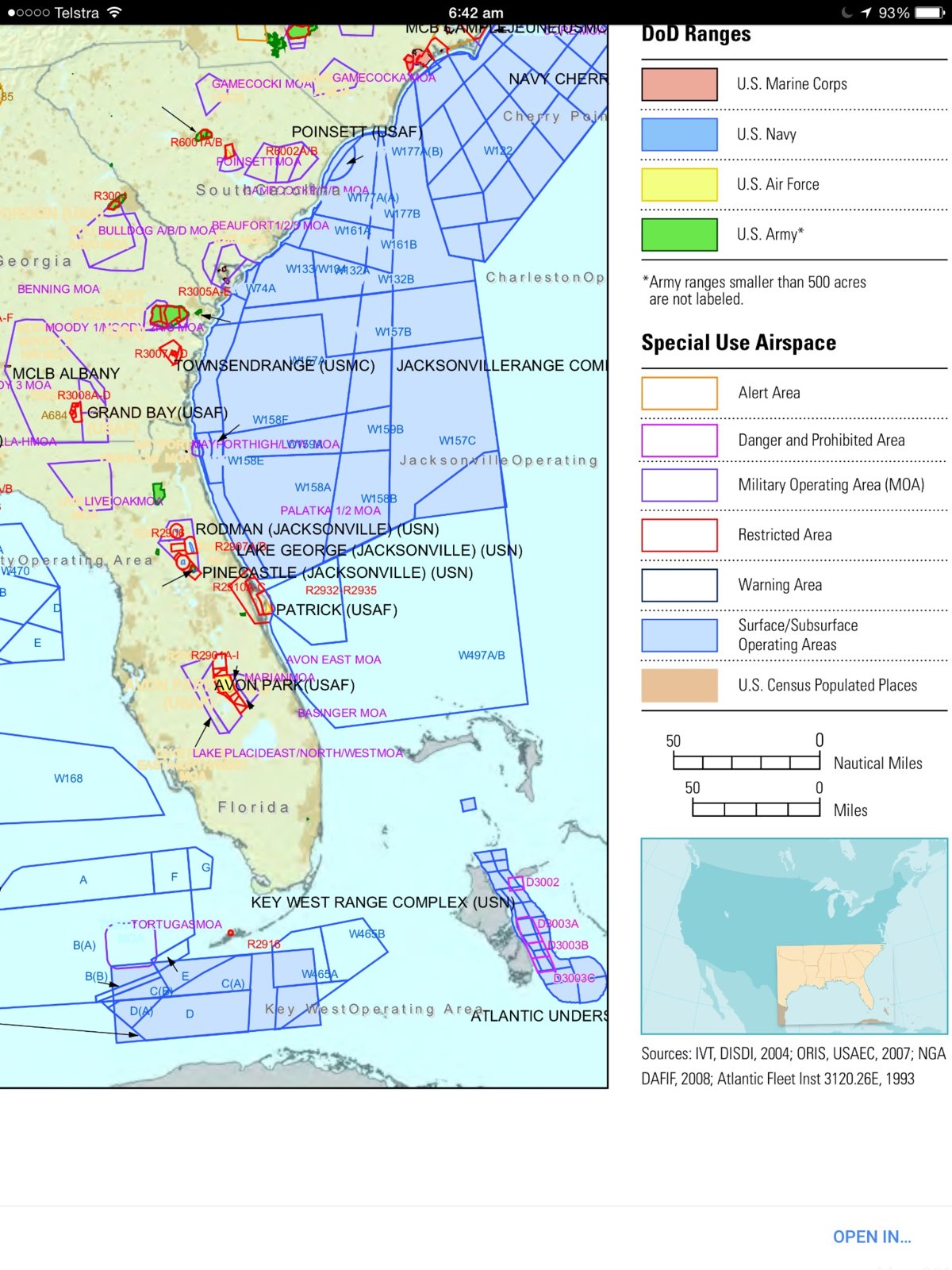