As seen on Sept. 25th - the peak of Grand Teton in stiff winds, creating condensation through pressure changes which are causing cooling. No other clouds around.

Edit: While still 'aerodynamic' in a broader sense, the formation process is different from the one seen on aircraft wings as Skephu points out in the post below; it involves a vertical movement of air on the lee side.
And as M Bornong indicates this is called a "Banner Cloud". 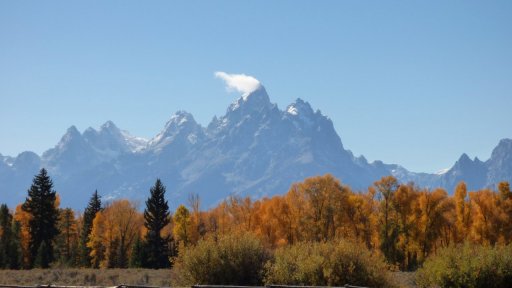 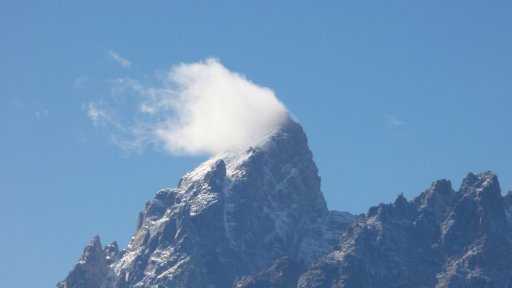 Interesting. Do you have a video of it?

skephu said:
Interesting. Do you have a video of it?
Click to expand...

I found this one at the Matterhorn. I think they call them Banner Clouds.

M Bornong said:
I think they call them Banner Clouds.
Click to expand...

Indeed. But here I found a different explanation for their formation:
http://www-das.uwyo.edu/~geerts/cwx/notes/chap08/banner.html

Banner clouds are believed to form when air flows around a mountain (rather than over it). Vortices on both sides of the mountain are shed to the rear and produce upslope flow, opposite in direction to the prevailing wind, on the lee side of the mountain. This upslope flow is drawn to a non-hydrostatic pressure minimum just below the mountain crest (Fig 2). This low is a relative vacuum due to the flow reduction behind the obstacle (according to the Bernoulli theorem). The same flow pattern can also be explained through conservation of potential vorticity (1) (Note 12.K). The upslope flow may reach the lifting condensation level, causing cloudiness. The cloudy air in the lee of the mountain is continuously mixed with ambient air and shed to the rear, explaining the banner-like appearance.

Fig 2 (left). Schematic explanation for the formation of banner clouds.