Jeffrey Orling said:
And let's not forget that the core columns were 3 stories tall, the facade panels columns were also 3 stories and vertically staggered.

If by some miracle the entire core's columns were destroyed... it would involve 3 stories! Conceptualizing a one story collapse indicates complete ignorance of the structure.
Click to expand...

Maybe. But there are a couple of more subtle problems - possibly further advanced than we need at the stage of the current discussions in this thread.

What "really happened" was not the reason why Bazant & Zhou postulated "one story drop" (which they later reduced also). The "one story" was to provide the energy source for the limit case. It was legitimate for that original purpose. BUT it, in turn, led to two further sources of misunderstanding:

1) The problem which still persists as a misunderstanding by many debunkers. Viz the concept that the Top Block portions of broken columns somehow "fell through a gap" to impact the lower portion of the same broken column. That simply is not how a column fails by buckling assisted by heat weakening and load redistribution. The column "scrunches down", the top end getting closer to the bottom, there is no "gap" to pass through and -- key point -- the ends bypass and overlap. Here an example: 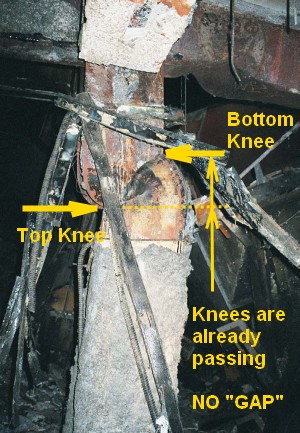 ... it is NOT "Twin Towers for obvious reasons - possibly WTC6. But note the top part is "scrunching" past the lower part - clearly a consequence of localised heating. There are a couple of other mechanisms... same net result.

...The likelihood of the falling building section aligning vertically with the columns below was small, given the observed tilting,.."

That statement is ambiguous as to causality. But when read with the causal implication that tilting prevented alignment it is a wrong explanation. And a false argument that too many debunkers have relied on. Tilt occurred because some columns had already failed (on the "low" side of the tilting Top Block). The gap previously occupied by each failed column had reduced. That part of Top Block was lower therefore Top Block tilted. And the column had got shorter not as a result of Bazant's imagined "gap" but because the column had buckled or "scrunched". Which meant that the two end parts of the column were already moving past each other - AKA "bypassing". Column failure preceded and caused "tilt". So tilt did NOT prevent column ends bypassing - they already had bypassed by the time tilt came into being.

Those two are probably the main causes of continuing misunderstanding. Both are consequences of the false assumption that the top part of columns somehow dropped through an imaginary gap.

The Bazant & Zhou "Limit Case" hypothesis was logically correct BUT caused so much confusion which still persists. I have questioned whether the whole Twin Towers collapse debate may have progressed faster and been better informed if B&Z had never written that paper.

And don't overlook the multiple ironies flowing from the still unresolved issue that Szuladzinski, Szamboti and Johns claim that Bazant and Zhou got the sums wrong. They allegedly over-estimated the falling weight and underestimated the residual strength of failing (folding) columns.

It is well known, and contentious with truthers, that NIST asserted that global collapse was inevitable. To what extent was NIST relying on Bazant & Zhou's "Limit Case"? Maybe B&Z were wrong. We are now assured from later explanations, associated with the controversies over the "ROOSD" acronym, that global collapse was in fact inevitable and unstoppable. Maybe NIST's claim as originally made was "Right for the wrong reasons"?...

We don't need to go down that path in this thread - the topic has been raised on previous occasions.
Last edited: Jan 9, 2022

"The Bazant & Zhou "Limit Case" hypothesis was logically correct BUT caused so much confusion which still persists. I have questioned whether the whole Twin Towers collapse debate may have progressed faster and been better informed if B&Z had never written that paper."

Of course a limit case... is simply a computed theoretical... and while it is technically "true" (settled engineering) it does not describe the actual event. Perdue does a better job in this paper:

Jeffrey Orling said:
And let's not forget that the core columns were 3 stories tall, the facade panels columns were also 3 stories and vertically staggered.

If by some miracle the entire core's columns were destroyed... it would involve 3 stories! Conceptualizing a one story collapse indicates complete ignorance of the structure.

To "revisit" the columns "destroyed" by the plane impacts.... They were either severed or severely bent and subject to buckling from the service loads. It's likely that MOST of the column would remain and braced. 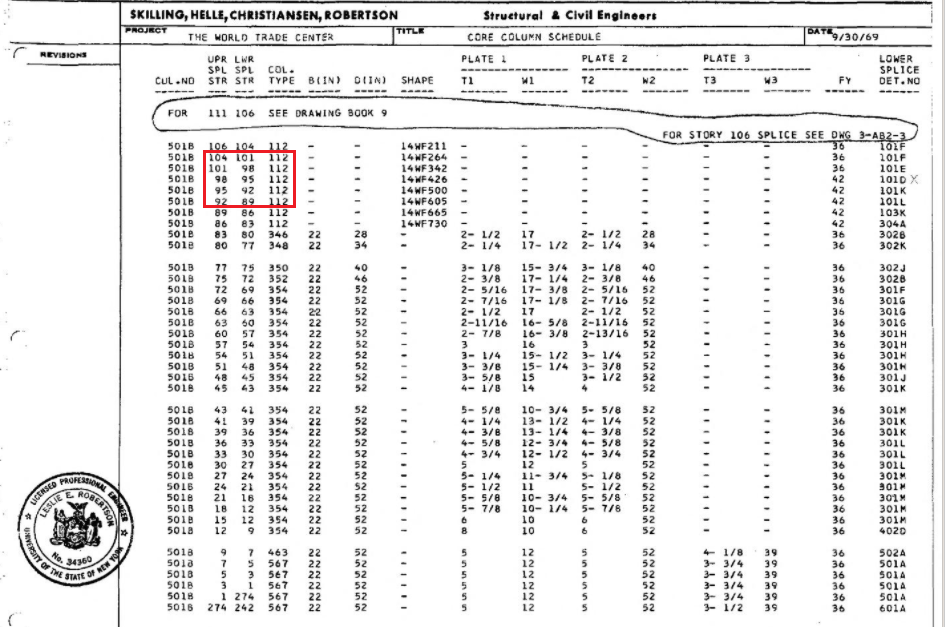 thanks... doesn't change much

Econ makes the interesting point about a drop means a gap. YES there was a 1 floor gap between slabs... but the columns would have to be interrupted/gapped for the same one floor distance. This did not happen to more than a handful of columns hit by the plane. Virtually all the remaining which failed post plane strike from heat responded/buckled in a similar fashion to the pic Econ previously posted... no gap.

Jeffrey Orling said:
"The Bazant & Zhou "Limit Case" hypothesis was logically correct BUT caused so much confusion which still persists. I have questioned whether the whole Twin Towers collapse debate may have progressed faster and been better informed if B&Z had never written that paper."
Click to expand...

I note that you neither confirm nor deny my two main points of assertion which are: "The Bazant & Zhou "Limit Case" hypothesis was logically correct BUT (Point #1) caused so much confusion which (Point #2) still persists. So I"ll repeat - (1) B&Zcaused a lot of confusion AND (2) that confusion still arises whenever the topic is discussed.

Jeffrey Orling said:
Perdue does a better job in this paper:

Actually all that paper does is present a single issue speculation viz: "We estimate that a core collapse mechanism could be initiated if the tower core column temperatures were elevated to about 700oC."

Note that it assumes all core columns heated to 700 degrees. And presents no proof that such is what happened. So all it really claims is "If we heat all the core hot enough the heat will cause collapse and other factors like column effective length with have little effect."

The Bazant and Zhou paper(s) caused a lot of confusion which lasted for years. The paper by Irfanoglu and Hoffmann has had nothing like that level of impact and misleading effect.
Last edited: Jan 10, 2022
You must log in or register to reply here.