INTELLIGENCE AUTHORIZATION ACT FOR
FISCAL YEAR 2021
JUNE 17, 2020.—Ordered to be printed
Mr. RUBIO, from the Select Committee on Intelligence,
submitted the following
...

The Committee supports the efforts of the Unidentified Aerial Phenomenon Task Force at the Office of Naval Intelligence to standardize collection and reporting on unidentified aerial phenomenon, any links they have to adversarial foreign governments, and the threat they pose to U.S. military assets and installations. However, the Committee remains concerned that there is no unified, comprehensive process within the Federal Government for collecting and analyzing intelligence on unidentified aerial phenomena, despite the potential threat. The Committee understands that the relevant intelligence may be sensitive; nevertheless, the Committee finds that the information sharing and coordination across the Intelligence Community has been inconsistent, and this issue has lacked attention from senior leaders.

Therefore, the Committee directs the DNI, in consultation with the Secretary of Defense and the heads of such other agencies as the Director and Secretary jointly consider relevant, to submit a report within 180 days of the date of enactment of the Act, to the congressional intelligence and armed services committees on unidentified aerial phenomena (also known as ‘‘anomalous aerial vehicles’’), including observed airborne objects that have not been identified.

The Committee further directs the report to include:

The above language is causing great excitement in the UFO community. For example:

Nevertheless, a very interesting development, which to a large degree has been one of the main actions which To The Stars Academy of Arts & Science (TTSA) have been working on in the background. Kudos to them.

This bill represents years of hard work and the progress it can lead to if passed is very exciting.

This isn't actually a bill though. It's comments from the intelligence committee regarding the bill. The paragraph isn't a proposed law, it's a directive from the committee.


Is this significant? Well, looking at the language of the committee comment it all sounds quite reasonable. They are concerned about airspace incursions that are not identified. They are also concerned that foreign adversaries might have developed aerospace capabilities that put the US at a disadvantage. These are perfectly valid and significant concerns that the military obviously shares and has been investigating, to some degree.

What this comment amount to is essentially oversight of the existing processes, to ensure that those concerns are addressed and that improvements are made if needed.

So why the excitement?

And although many of them will deny this, they are frustrated because they think UFOs are something incredible, maybe representing an epochal revolution in physics, possibly even alien visitors from another world. They are frustrated because they really want this incredible thing to be revealed, and they have been thinking that "disclosure" is just around the corner for years. But it never happens.

What position (#1 or #2) does this report comment support? Really #2, and the serious presenting folk are excited because of this, like Chris Mellon:
Source: https://twitter.com/ChristopherKMe4/status/1275465099449446401


But really all we've got here is the Senate Intelligence Committee simply carrying out its oversight role. Perhaps colored somewhat by the media attention surrounding the US Navy videos. But really nothing has significantly changed, despite all the UFO folk telling you that it has.

Look at it in either context. If #1 is true, then what's the point of this report? Surely the Senate Intelligence Committee would already know about the aliens. What about the rest of the world.

If #2 is true, then why isn't this a huge deal? If they really thought there was good evidence that the Chinese had developed anti-gravity or reactionless propulsion, then that would be the most significant development in military terms since Hiroshima. It would need more than this.

Finally, and sadly, it's going lead to another round of nonsense tabloid headlines, like "Gov admits Aliens are Real", which will simply fan the #1 flames a little more.

Staff member
Tom DeLonge is claiming that the language actually came from Chris Mellon, a member of DeLong's To The Stars Academy (TTSA).

This seems plausible. Mellon could have written it for Marco Rubio, who, as I remember, has expressed interest in the subject. 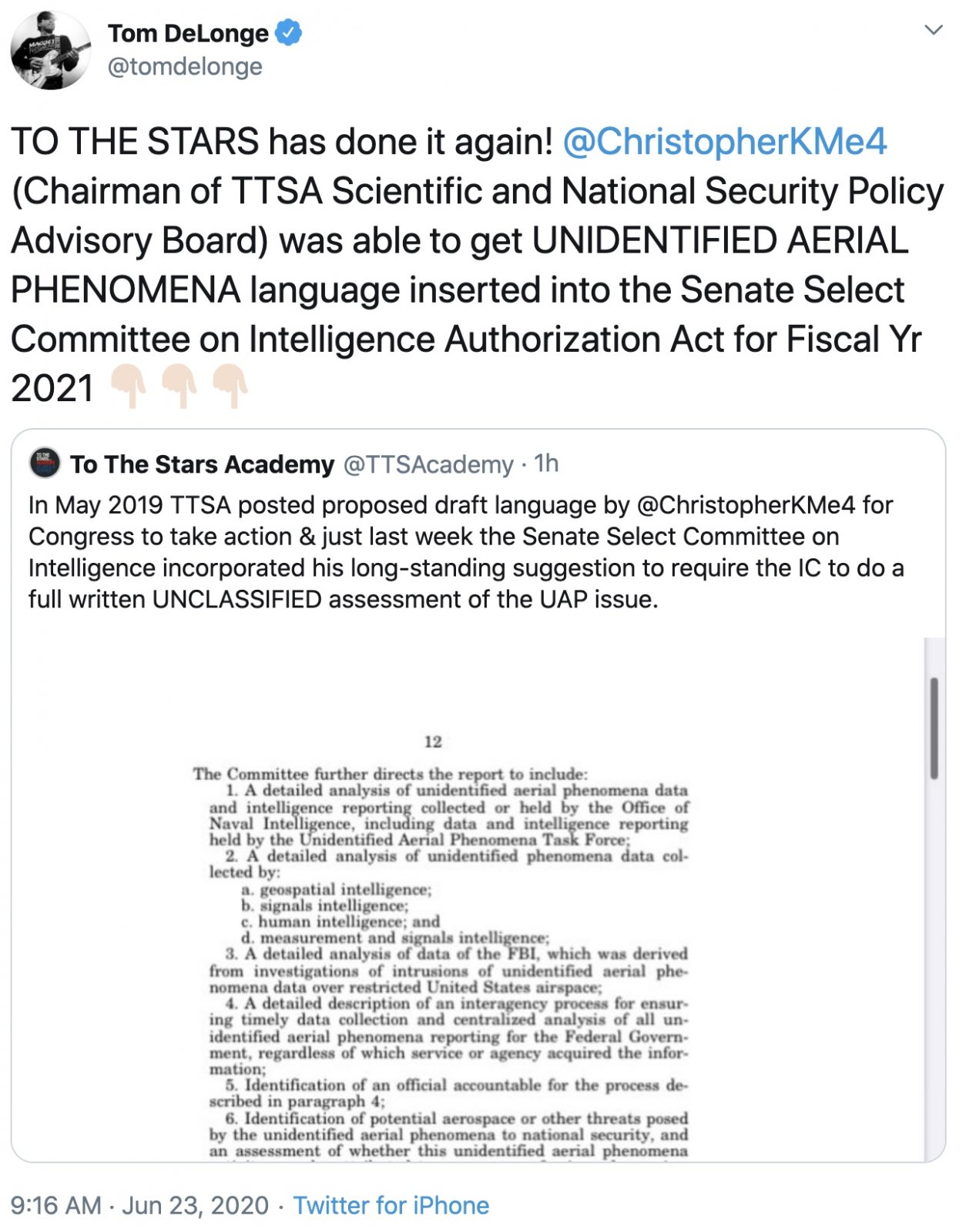 Mick West said:
I think this whole thing illustrates something of a division within the UFO community. You basically got two options.

AND THAT is one of my biggest problems with TTSA.. The TTSA team Luis Elizondo, Chris Mellon, Steve Justice and Hal Puthoff clearly believe in #2 but Tom DeLonge clearly believes in #1 but it goes deeper, believing in #2 basically requires you to believe that Tom DeLonge is lying about most of his story. So does the TTSA team think Tom is lying? Why would they work with someone who they believe is a liar? From their behavior and what they have said about him it would seem they dont believe he is lying but then that basically discredits the whole "#2 belief" they share.. Im so confused..
Last edited by a moderator: Jul 18, 2020
J

Given the tremendous advances in aviation technology over the past 4 decades, autonomous or directed aerial vehicles pose a significant threat to the US and other nations. Go back to the mid-70s, and look at the Tomahawk cruise missile. Capable of flying way below radar by terrain following, carrying a 450 kg payload, range of 1700 km, it was a pretty formidable thing to have an inventory of. I surely hope the US military is paying extremely close attention to the potential for these devices.

That was then, and now anyone can have an autonomous or lightly remotely controlled drone for whatever purpose (FAA certification aside). These things are very real, and pose a serious threat. Drug runners have been using variants of this stuff for a long time, as well as the good ol' poor man's submarines that keep the radar profile way down. Lot of this stuff has super low radar cross-section, and terrain-following advances mean this stuff can be just above treetop level for hundreds of km. Pretty darned cool stuff, the stuff of science fiction (at one time). And it's cheap, in that anyone can get their hands on it. If the US military isn't on top of this stuff every moment of every day, then they aren't doing their job.

Yeah, there's some pretty trick military tech, but it's all got to behave according to physical laws. Yes, it's always possible that, just like a century or more before the atom bomb, we had no concept of the physics required to imagine or make that kind of thing happen, but since the the atom we've gone a long way in starting to understand the basics of physical reality, and so far it's not just turtles all the way down. Wormholes, dark matter and energy, string theory, etc., all are fascinating, but in some cases there's not a lot of science meat on them bones, and it drifts more into philosophy or worse, pseudoscience, depending on who is speculating.

I worry far more about bad actors on this world's stage wanting to do harm than some "Independence Day" alien hi-jinks. By "far more" I really mean so far down on the probability scale that the thought rarely crosses my mind unless I a see the reaction to a thing like this. Yeah, I spent an entire summer as a 10-11 year old reading every UFO/paranormal/alien book in the local library, and wrote some amazing stories for my 7th grade English writing class. I also learned a thing or two about science, reality, engineering, physics, chemistry, psychology, medicine, human anatomy, yada yada yada. Some people like to believe that they're right in the middle of all sorts of occult reality if they could just open their eyes or look in the right direction (think Flatland). Me, I have enough of an imagination to be amazed by reality more than having to make something up. I guess I'm just simple-minded.

Nonetheless, it's a beautiful Saturday!

It centers around two different groups...As to your item #1 I think this mainly centers around "UFO Young Guns" those who are ignorant of UFO history and are influenced by conspiracy theory...

As to #2 that encompasses more the older UFO researchers who are familiar with UFO history ...

I agree with this.
Last edited by a moderator: Jun 1, 2021
You must log in or register to reply here.

Jan 10, 2021
ParanoidSkeptic2
P
U
The UAP Policy and Discursive Shift - Changing narratives on UAPs and its effect on policy.