As you would have expected, Disney has produced yet another movie that teaches children that trails come out of jet engines. In real life they don’t. If you see a trail coming out of a jet engine, it is a chemical aerosol, and fortunately, many are beginning to realize this.

Staff member
"Planes" actually seems to have very few contrails. It does have some "chem"trails though, as the main character is a crop duster

There's some wingtip high-g contrails, some air-show smoke, but not a lot of actual contrails.

Staff member
There is this shot of some row clouds though, sure to get people suspicious. 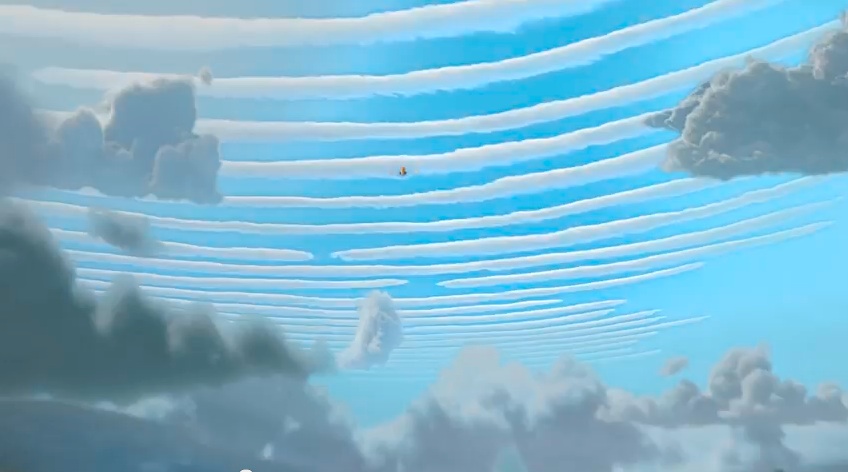 As you would have expected, Disney has produced yet another movie that teaches children that trails come out of jet engines. In real life they don’t. If you see a trail coming out of a jet engine, it is a chemical aerosol, and fortunately, many are beginning to realize this.

It looks good my grandson should love it .

They are very late on the scene for indoctrination then. Roger Ramjet had them in the 1960s:

GregMc said:
They are very late on the scene for indoctrination then. Roger Ramjet had them in the 1960s:

Good old pill-popping Roger.
"This proton energy pill will give me the power of twenty atom bombs for a period of twenty seconds!"

Pixar did that short film about the Illuminati didn't they?

Cos no one thought "Hold on chaps, shouldn't we condition peoples' minds BEFORE we start doing this?"

File this one under "The all powerful 'them' are incredibly inept".

Staff member
Indeed, according to the chemtrailers, these kids have grown up their entire lives with persistent contrails in the sky. So what are they being conditioned to accept now? Talking planes?

There's an interesting disconnect with the time they think contrails started becoming persistent. For most people that time was when they first hear of chemtrails, so there's a huge lump of people who simultaneous have the beliefs that

Problem is, these place overlap. You'll find people in Los Angeles who simultaneously hold all three beliefs about Los Angeles.
You must log in or register to reply here.

Related Articles
Anthony Hilder's AIRCRAP advertising Aluminum Oxide as a 'Natural Cellular Defense'
1959 "Eyes in Outer Space" Disney's futuristic glimpse of geoengeneering
Disney "Illumanti" pictures.
Debunked: Coincidences. (Disney World Couple in Same Photo Before They Met)
Wellaware1: Walt Disney is Hitler
Corbell: "Unidentified glowing objects near US Navy ship" [Planes or drones?]
Satellite ADS-B Data in FlightAware24 - Blue Planes Prove Globe Earth
UFOs Filmed from Moving Helicopters and Planes. Not So Fast!
Flares in the Sky? [Landing Lights of Planes landing at Phoenix Airport]
Explained: Why Planes Get Dented Nosecones - It's Mostly Birds
Donald Trump initially said he thought there were "bombs" on the planes on 9/11
How Do You Take Good Photos of High Altitude Planes and Contrails?
Automated Video Tracking of Planes
Two Large Planes Flying Parallel, Chiloquin, OR. Is it Legal? Yes.
Three Planes Turn Right, South of San Francisco
911 video with edited out planes.
What might these three planes be?
Contrails from Turboprop Planes at lower than typical altitudes
Explained: Dark contrails behind bright planes
Two planes at the "Same" Altitude, only one leaves a trail
Claims Ukranian military using civilian planes as cover
Debunk this [Planes at different altitude and different contrails over France]
Racetrack Contrails and "Bizzare" Planes off the Yorkshire Coast
How could the planes wings penetrate the WTC?
Two planes in Germany flying Racetrack patterns together [Likely Eurofighter Typhoon Practicing]
Tip: Planes with "No callsign" in FlightRadar24
Reward to catch people who point lasers at planes
9/11: Any Evidence for remote controlled planes?
Debunked: US Reported In Panic After Chemtrail Planes Forced Down In India and Nigeria
No planes today
Photos of Planes and Contrails (That you took yourself)
Identifying chemtrail planes
Debunked: Chemtrail Plane and Other Unlabeled Photos from Facebook etc.
WTC: Were the planes drones, how hard is flying a 767 into a building?
"Unmarked planes"
Explained: UFOs that look like flares or fireworks [Aerobatic planes with wingtip pyrotechnics]
Advocating violence against "Chemtrail" planes, pilots, scientists, and debunkers
Crossing planes [Planes at different heights]
Share:
Facebook Twitter Reddit Pinterest Tumblr WhatsApp Email Share Link