5G may turn out to be a health hazard for people in aircraft.

The RTCA (originally "Radio Technical Committee for Aeronautics") has issued a report at https://www.rtca.org/wp-content/upl...t-Report_274-20-PMC-2073_accepted_changes.pdf last year.

The task force was formed in April to address this issue. In December, the FCC plans to auction licenses in the 3.7– to 4.2-GHz frequency band.

By evaluating radar altimeter performance in light of the “expected 5G emissions in the 3.7– to 3.98-GHz band,” the task force was able to test radar altimeters to determine their tolerance to the expected 5G interference signals, according to the report. Other research included a risk assessment of how much this interference might happen and its impact on aviation safety.

According to the task force, “The results presented in this report reveal a major risk that 5G telecommunications systems in the 3.7– to 3.98-GHz band will cause harmful interference to radar altimeters on all types of civil aircraft—including commercial transport airplanes; business, regional, and general aviation airplanes; and both transport and general aviation helicopters.” The problem isn’t limited to the 5G band allocation of 3.7– to 3.98-GHz, however, but also “the spurious emissions from such systems within the protected 4.2– to 4.4-GHz radar altimeter band directly.”

The report further warned of “the possibility of catastrophic failures leading to multiple fatalities, in the absence of appropriate mitigations.”

“The results of the study performed clearly indicate that this risk is widespread and has the potential for broad impacts to aviation operations in the United States, including the possibility of catastrophic failures leading to multiple fatalities, in the absence of appropriate mitigations,” the RTCA stated in its report. Research for the report was conducted by the Aerospace Vehicle Systems Institute, a cooperative research organization based out of Texas A&M University.

Radar altimeters are critical during landings, once an aircraft moves below 2,500 feet from the ground. At that point, no other instruments provide an accurate measurement of a plane’s distance from the ground.

“It’s so important to have an accurate reading, because if it’s a bad reading it could lead to the airplane doing something you don’t want it to do.” explained Terry McVenes, the RTCA president and chief executive. McVenes is a former Boeing safety executive with 30 years’ experience in the commercial aviation industry.

The FCC and supporters of expanding 5G argue that the concerns are overblown.

“In the C-Band Order, the Commission concluded that our rules would protect radio altimeters used by aircraft, and we continue to have no reason to believe that 5G operations in the C-Band will cause harmful interference to radio altimeters,” Will Wiquist, a spokesman for the FCC, said in a statement. “Among other things, these altimeters operate with more than 200 megahertz of separation from the C-band spectrum to be auctioned, more protection than is afforded in some other countries.

“Moreover, the RTCA report was prepared outside of the joint aviation/wireless industry group that was set up at the Commission’s request and is not a consensus position of that group. Indeed, at least one other member of that multi-stakeholder group has expressed significant concerns with the study and several of its assumptions, and the Commission’s experts have concerns with this study as well.”

Just a couple of comments in the spirit of “I read this so you don’t have to”. This is in no way an attempt at debunk. The study says what it says.

Here is the link to the actual study in case you want to go through all 231 pages some time: https://www.rtca.org/wp-content/upl...t-Report_274-20-PMC-2073_accepted_changes.pdf

A few things jumped out at me as I tried to separate the study itself from the hype in the Defense News article. By hype I mean the potential catastrophe if radar altimeters become useless because of 5G. Start with the FCC position that interference isn’t going to occur. The study acknowledges this, but they make the assumption that the FCC is wrong, and state that explicitly (i.e. what if we assume that interference occurs). So they studied assumed interference rather than actual. I.e. if there is interference, this is what it could look like.

One of my other key takeaways is that they did not make any physical measurements of actual altimeter/5G interactions. The study is entirely based on modeling. It would be very interesting to see someone test an actual aircraft flying low over a 5G base station.

It was very interesting that they examined a scenario around Chicago O’Hare airport. They mapped the existing 4G LTE base stations to the aircraft glide paths to see how their model might affect the altimeters. According to the models and assumptions, it would. Again, they didn’t actually test this in the real world.

If you dive into the study, there are about 100 pages at the end that has comments and changes suggested by the reviewers. One interesting exchange was that the wireless representative pointed out that the model used for 5G base station radiation patterns was not accurate. The study then re-ran the models with the correct patterns.

There’s plenty to be read into this study, as it seems to be preliminary to a call to action to get the FCC to codify some constraints on the wireless industry to make sure they don’t accidentally accidentally screw up the aviation industry. A worthy cause and if nobody does anything, people could die, but I think the article went a bit overboard on whether that’s likely or not.

IF the FCC and the wireless industry are both wrong, AND the assumptions made in the study prove accurate, then altimeter manufacturers will need to design new radars and aerospace companies will need to install them.
Last edited: Aug 21, 2021

Mechanik said:
One of my other key takeaways is that they did not make any physical measurements of actual altimeter/5G interactions. The study is entirely based on modeling.
Click to expand...

That's slightly misleading.
Yes, they didn't fly an altimeter over a 5G setup cranked up to maximum.
But they did do physical measurements.

They figured out how much RF a 5G base station emits, both in the C Band as well as in the band that the radio altimeter is using (spurious emissions). They then set up an "altitude" in the lab via a fiber-optic line, with the ability to inject 5G emissions into it (both types of interference separately), and hooked 9 different commercial altimeters up to it and measured the effect of interference at 3 different altitudes.
Small units (as would normally be used in General Aviation aircraft and helicopters) did worst.

The modeling comes in when they figure out how much 5G signal would reach an aircraft in different scenarios in reality. RF signal propagation is well-researched, I'm fairly confident that these models are accurate.

They also model interference from smartphones ("user equipment") aboard aircraft based on other studies that I haven't looked into.
Last edited: Aug 21, 2021

Mendel said:
They then set up an "altitude" in the lab via a fiber-optic line, with the ability to inject 5G emissions into it (both types of interference separately),
Click to expand...

I have not read the whole thing, where you got this info from, but I am sure this is not correct. Unless I miss understand your text above, you cannot inject RF signals into a fibre optic cable. Perhaps you mean RF cabling (waveguide)?


This is done using one or more optical fiber delay lines along with fixed and variable RF attenuators.

Commercial products exist to transmit RF over an optical link; obviously they don't inject the RF into the fiber directly.

The technical analysis of this is beyond my skill set, however 5g is pretty widely deployed, especially around major cities where major airports are located, which is also where planes operate close enough to the ground for any mistakes in measuring their altitude to be likely noticed in terms of them flying into things. The lack of reports of that sort of thing happening with increasing frequency is a Good Thing, of course, and probably has some value as evidence of whether 5g interference is actually a real-world problem.

Basically, I ( or anybody) could connect a wire to my (their) oscilloscope, and receive some sort of signal......in the bandwith desired, Wire length would be important.... as it acts as an antenna.

Leifer said:
Basically, I ( or anybody) could connect a wire to my (their) oscilloscope, and receive some sort of signal......in the bandwith desired, Wire length would be important.... as it acts as an antenna.
Click to expand...

But could you connect a wire to your altimetere unit and get it to malfunction?
The "long wire" aka the delay loop in their lab setup is fiber optics and doesn't pick up HF interference.

The FAA has confirmed the concerns.

The FAA ruled on Tuesday that those thousands of US planes (and some helicopters) won’t be able to use many of the guided and automatic landing systems that are designed to work in poor visibility conditions, if they’re landing at an airport where there’s deemed to be enough interference that their altimeters aren’t reliable. “Landings during periods of low visibility could be limited due to concerns that the 5G signal could interfere with the accuracy of an airplane’s radio altimeter, without other mitigations in place,” FAA spokesman Lynn Lunsford tells The Verge.

Specifically, the FAA issued two airworthiness directives that, if adopted, allow the FAA to shut down bad weather (IFR) landings at places it deems susceptible to 5G interference. This applies to pretty much every aircraft and helicopter with a radio altimeter.


The RTCA report identified the possibility of interference from both wireless emitters (on base stations, for example) as well as onboard user handsets. The RTCA report and conclusions remain under review, including by federal spectrum regulators. The FAA risk assessment included consideration of the RTCA report, public comments to the RTCA report, and analyses from radio altimeter manufacturers and aircraft manufacturers in support of the safety risk determination. The analyses FAA considered were consistent with RTCA’s conclusions pertaining to radio altimeter interference from C-Band emissions. The FAA determined that, at this time, no information has been presented that shows radio altimeters are not susceptible to interference caused by C-Band emissions permitted in the United States. 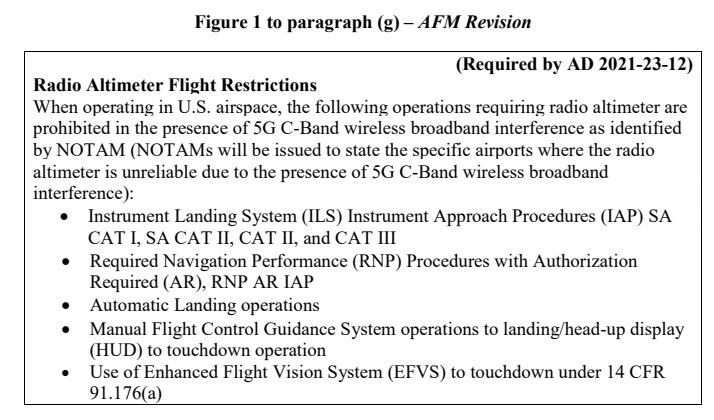 It remains to be seen whether the FAA will actually make use of this power.
T

“This obviously continues to be a rapidly-evolving situation, and it is imperative that business aviation operators be aware of all notams affecting their flights and what they may entail,” said Heidi Williams, NBAA’s director for air traffic services and infrastructure. “Guidance included in these notams may range from simple advisories about 5G network operations in the area to prohibitions of some instrument approach procedures due to potential interference affecting radar altimeters.”

The Federal Aviation Administration (FAA) on Friday disclosed a list of 50 airports where 5G “buffer zones” will be put in place once AT&T and Verizon turn on C-band spectrum later this month.
In a January 7 statement the FAA said carriers “agreed to turn off transmitters and make other adjustments near these airports for six months to minimize potential 5G interference with sensitive aircraft instruments used in low-visibility landings.”
The exclusion zones around certain airports would reduce 5G C-band signal levels by at least 10 times on the runway or during the last mile of final approach and the first mile after takeoff, according to an AT&T spokesperson, which the carriers had proposed and outlined in a January 2 letter to the U.S. Department of Transportation and FAA.