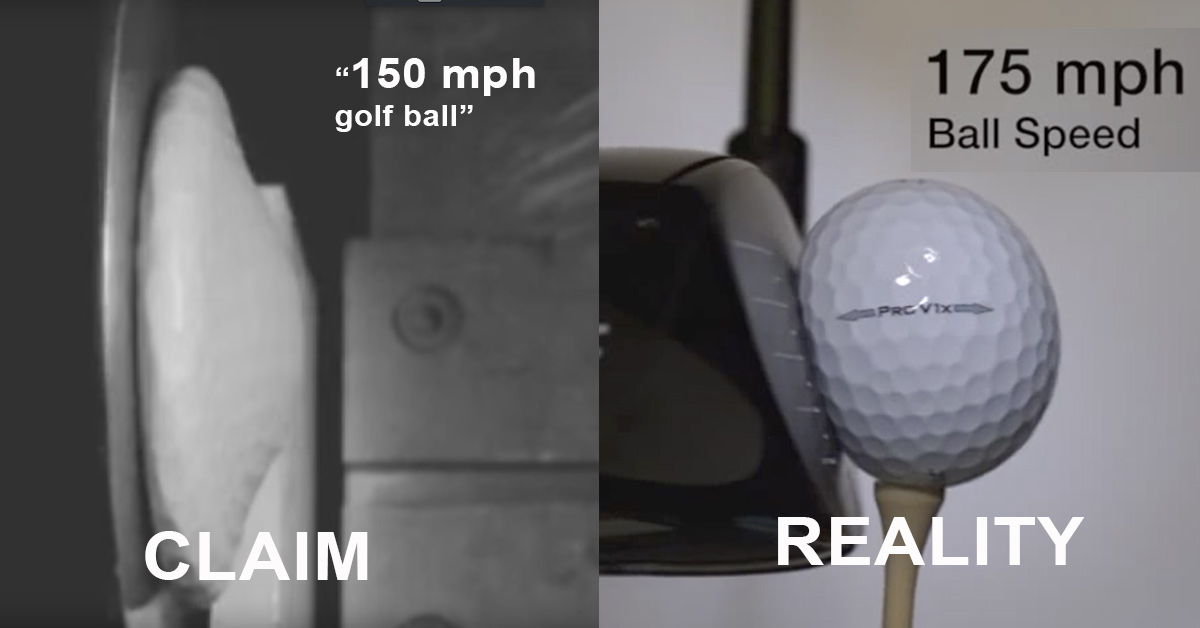 
The above video has been around since 2009, although the original source is unknown. It claims to show a golf ball hitting a steel plate at 150 mph. It almost looks like a water balloon. However if we compare it to other videos of golf balls hitting things at the same or faster speeds, we can see this it is not what it is claimed.


And another more similar to the first, of a ball hitting steel at 150mph.
Source: https://www.youtube.com/watch?v=00I2uXDxbaE


This fact has been pointed out many times over the years. Each time the video comes up (either the first upload in 2009, or later copies) someone will point out that it's not real. But still it gets repeated and shared

What the video most likely is is a foam practice ball. 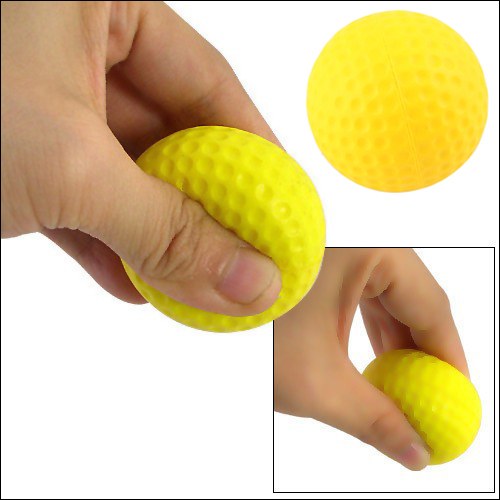 These balls look just like regular golf balls but are lighter and more flexible, so are safe for indoor use, or practice outside in limited space.

Is it possible though that this is a video of an actual golf ball, just one travelling faster, like 300mph? Intuitively not, as you'd expect the golf ball to crack or explode if it hits something so much faster than designed, and the amount of distortion does not look possible for the semi-rigid shell of a real ball.

But can we prove it? Well one physical number we know about gold balls is the "coefficient of restitution" (CoR) which at it's simplest the fraction of the speed the ball will have after it bounces off a large hard heavy object like a steel wall. In practice the equations are more complex using vector arithmetic, and the CoR really applies to two objects, and you have to take their mass into account. But the CoR of a golf ball hitting a golf club is usually given as around 0.83 (the legal limit placed by the USGA)

Here things are complicated slightly by the relatively light steel plate moving after being hit, however we can analyze the various motions before and after the bounce by picking appropriate frames with the least frame-to-frame deformation of the ball. 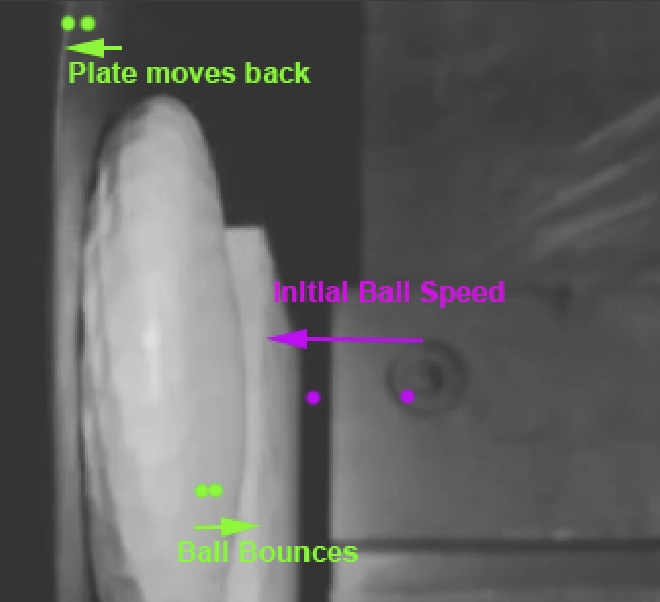 Here the two dots indicate the position of the ball (and the plate) at six frames apart (where a frame is something that actually moves in the youtube video, not the 30 fps video itself). We can see the ball bounces back from the plate with a relative velocity (i.e the speed relative to the now moving plate) of much less than the original velocity. In fact it's about a quarter. We can't do the exact math without knowing the mass of the object, however it's quite safe to conclude that this is not a regulation golf ball.

[UPDATE 2019] I'm not entirely sure the above is correct. This video shows large amounts of deformation, although not as much as is shown above.
Source: https://www.youtube.com/watch?v=JT0wx27J9xs&feature=youtu.be&t=393
Last edited: Sep 12, 2019

Just a question. I don't play golf but I do cricket. Over the game a cricket ball gets softer as it goes. A golf ball is made in a similar way (I think) so could it me a softened golf ball.?

David Fraser said:
Just a question. I don't play golf but I do cricket. Over the game a cricket ball gets softer as it goes. A golf ball is made in a similar way (I think) so could it me a softened golf ball.?
Click to expand...

cricket balls are leather with string inside. sprayed with a shellac type substance to make them originally shiny 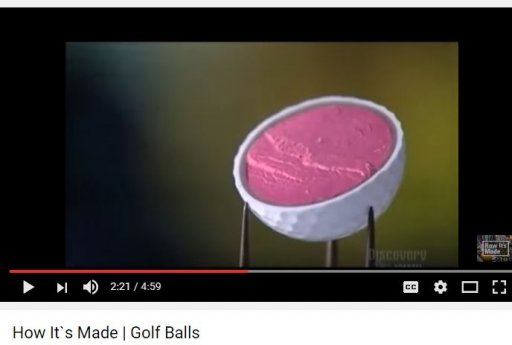 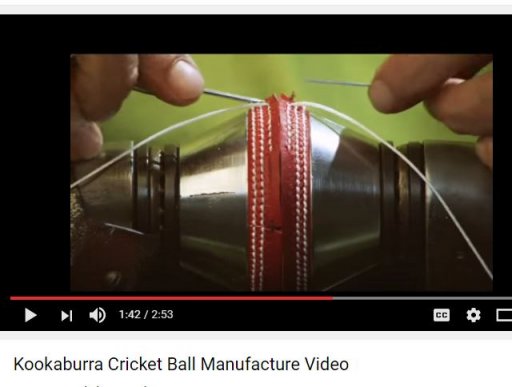 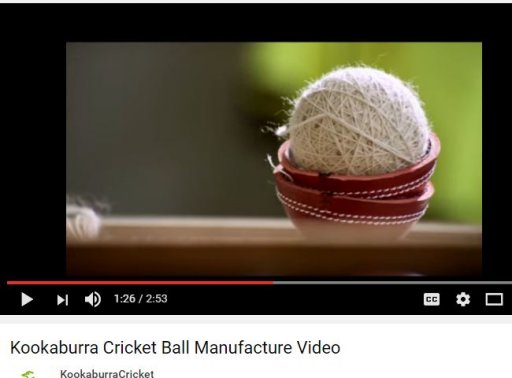 1. The black and white footage implies to me that the film might be OLDER than 2009 and I know the internal construction of the golf ball has changed over the years. I suggest that this might have been a older or even experimental version.
2. In the original video the ball is the object in motion and it collides with a steel plate that is secure and stationary. The second video the movement comes from the club hitting the ball and following through, this is not an equal comparison to the ball into a steel barrier. The energy exerted on the golf ball would be much larger for the ball to go from 150 mph in one direction to the completely opposite direction compared to sitting still then moving in one direction at 175 mph

I would also agree with the post David Fraser made about the use/wear of the ball and the elasticity of the plastic.

True of modern balls, but golf balls have a long and interesting history. 'Proto-golf' balls, used in various games that precede golf dating back to Roman times were often solid wood or 'hairy' - leather stuffed with horse hair and / or straw or similar material. Next came the feather balls, leather stuffed with feathers which date from around 1610 and were the 'official' balls in the earliest days of organised golf.

Feathers are keratin, a hydrocarbon plastic, found in most animals, forming hair and nails in man. The ball's manufacturing process began as three pieces of leather stitched together and turned inside out leaving a ¼ inch slit through which the feathers were pushed with the ‘brogue’ using the chest. The feathers and leather were wet and, as they dried, the feathers expanded and the leather shrank, creating a two way pressure and a tight ball with characteristics only recently matched by modern balls. Opinion is divided as to whether the feathers or leather were boiled and there was more than a 'hat' full of feathers in each ball. Afterwards the balls were painted white for protection and so that they could be found.

Content from external source
Next came the Gutty balls, dating from 1848, these were made from moulded gutta-percha gum. Which was heated then cast into ball shapes. Then from 1899 you have the Haskiell ball, tightly wound rubber threads, initially with gutta-percha gum surface, although this was changed to various types of plastics as the twentieth century went on.

The golf ball as we know it today dates from 1967 when solid cores of various materials started to replace the wound rubber.

Whitebeard said:
The golf ball as we know it today dates from 1967 when solid cores of various materials started to replace the wound rubber.
Click to expand...

we're so geeky. I saw a pic of what looked like a modern ball that said the ad was 1952 (but I haven't been able to verify the date yet.

But this link has some nice history as well

By the 1960s Balata and rubber was done away with and replaced with urethane skins and synthetic resin cores. And while that sounds boring as heck compared to some of the earlier innovations, as we shall see in the next entry, there is something surprising about the modern-day golf ball. http://www.core77.com/posts/25240/A-Brief-History-of-Golf-Ball-Design-and-Why-You-Shouldnt-Hit-People-with-Baseball-Bats

Content from external source
I think the issue is once that urethane skin is applied the ball in that vid morphs shape just too much to be possible. And according to this Balata (if we want to go with the odd video theory... did they have ball cannons in the old days?) was actually harder than urethane.

urethane is technically softer than balata

Content from external source
I did discover that if it isn't a purposefully faked video (its kinda weird how the steel plate pushes back from impact), it is called CCOR testing

2008 study and accompanying video (these are baseballs though)
Cylindrical Coefficient of Restitution (CCOR) test
https://www.uml.edu/docs/ISEA2008_Youth_Baseballs_tcm18-60859.pdf 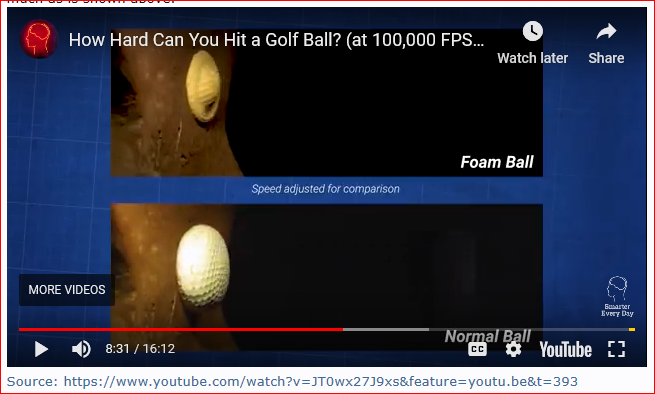 also, not sure what these words mean but he says at 9:00

"golf ball impacts result in an elastic collison up to 300mph, which is why it was able to handle the rocket club without any problems, that was under 300 mph" 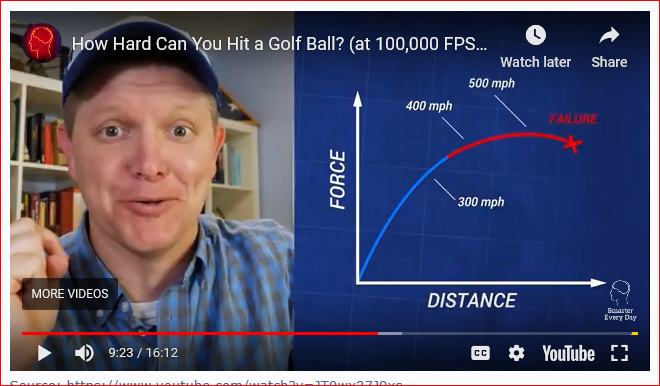 Content from external source
doesn't all that mean the real ball cant deform that way at 150mph?

deirdre said:
doesn't all that mean the real ball cant deform that way at 150mph?
Click to expand...

It means it would deform less. Very roughly around half as much.

Mick West said:
It means it would deform less. Very roughly around half as much.
Click to expand...