David Harris recently ran a story claiming that 100,000 illegal aliens were registered to vote in Pennsylvania. It takes some time to unpeel both parts of the story –the total number and their legal status—but the claim is both disingenuous and inaccurate.


There are currently 100,000 illegal aliens registered to vote in Pennsylvania, thanks to a previous Democrat law that automatically registered people when they renewed their driver’s licenses according to Public Interest Legal Foundation, who found similar problems in Virginia and New Jersey. PILF has now filed a lawsuit to force the state of Pennsylvania to remove illegal voters from its rolls. PILF included evidence that illegals had voted in elections over the past ten years or so. Their information could be more complete, except the Democrat administration in the state has refused to give them information deemed to be public.


Most of Harris’ article comes from a February 26, 2018 Washington Times story by Stephen Dinan.

More than 100,000 noncitizens are registered to vote in Pennsylvania alone, according to testimony submitted Monday in a lawsuit demanding the state come clean about the extent of its problems.

One part of the claim is already easy to debunk The Washington Times correctly uses the term “noncitizens,” while Harris transforms the term into “illegal aliens.” Harris is just plain wrong.

As mentioned above, the lawsuit comes from the Public Interest Legal Foundation (PILF)

The PILF page regarding the 100,000 illegal voters is here:
https://publicinterestlegal.org/blo...lease-data-100k-noncitizen-voter-registrants/

So, the real meat to the Harris article and the PILF claim seems to be from Philadelphia County Commissioner Al Schmidt, who testified before the Pennsylvania State House Government Committee on October 25, 2017.

In his written statement to the committee, Schmidt said [boldface in original document]:


After being sworn into office in 2012, I began working on identifying different types of voter fraud and voting irregularities occurring in Philadelphia elections. My office soon released a report documenting cases that we had found in the 2012 Primary Election.1 One such irregularity that we identified was non‐citizens registering to vote and voting. As you know, only U.S. citizens may legally register to vote and cast their vote in elections in Pennsylvania. While voter registration applications in Pennsylvania include the question “Are you a citizen of the U.S.,” the answer to this question is the only information county voter registration offices have to verify citizenship prior to a voter registration application being processed.

From 2012 until earlier this year, my office continued to research the issue of non‐citizens voting. We identified 220 non‐citizens who were registered to vote in Philadelphia at some point between 2006 and 2017.2

The root of the problem was a Pennsylvania Department of Transportation computer program that allowed people applying for a driver’s license to also register to vote. The program did not separate citizens from recent legal immigrants who could possess a driver’s license, but not vote.

As Schmidt points out in his testimony, these immigrants had to provide documentation when they apply for a license.


When non‐citizens apply for a driver’s license at PennDOT, they are required to provide stay documents to show their legal status to remain in the U.S. for at least one year. PennDOT verifies these immigration documents electronically with the U.S. Department of Homeland Security and the applicant’s driver’s license record is marked using an INS Indicator.

In his verbal testimony before the committee, starting at 1:03:50, Schmidt does discuss the possibility of 100,000 illegally registered voters. However, if you listen to his testimony, if is not definitive. The 100,000 is an estimated match with federal immigration records.

However, as soon as he says this, Schmidt begins walking back the number. He mentions that some of the people might have received citizenship. The actual number may be in the “thousands or tens of thousands.” In other words, he does not know. Since he is commissioner only for Philadelphia, his data is incomplete.
http://stategovernment.pasenategop.com/121217/

But there is a very large gap between the 220 non-citizens verified by Schmidt between 2006 and 2017 and the 100,000 in his worst case scenario today, a scenario that he does not actually claim is likely.

David Harris simply manipulated the two parts of Schmidt’s testimony: (1) redefining a possibly illegal vote by a non-citizen and making it a vote by an illegal alien and (2) grossly exaggerating the number from unverified information.

MikeG said:
David Harris simply manipulated the two parts of Schmidt’s testimony: (1) redefining a possibly illegal vote by a non-citizen and making it a vote by an illegal alien and (2) grossly exaggerating the number from unverified information
Click to expand...

Just for the record, w(1)while I agree some votes may be from what conservatives would consider non-citizens (ie greencard etc) there are also categories on the PENNDOT page that conservatives consider illegal aliens. I realize liberals view 'catch and release' persons -as well as some other categories- as "legal", but conservatives do not. Obviously they are technically legal as those are the current laws.

(2) I wouldn't say he necessarily "grossly" exaggerated the number.. he used the number the Commissioner used. and "his" claim says "according to PILF".

MikeG said:
The root of the problem was a Pennsylvania Department of Transportation computer program that allowed people applying for a driver’s license to also register to vote.
Click to expand...

76% of the problem according to the Commissioner [who was only analyzing Philadelphia County].

But I would like to point out to conservatives, that whether we call them "non-citizens" or "illegal aliens" that 1. some actual non-citizens are included in that count (ie green card holders, visa workers etc) and 2. the numbers in Philadelphia are relatively small.. only 41% of those registered to vote actually voted in Philadelphia.


Of the 220 non‐citizen registrants, 90 (41%) voted in at least
one election. Of those who voted, 44 (49%) voted on one occasion, while 46 (51%) voted in
two to twelve elections in the period in which they were registered. The total number of votes
cast by non‐citizens we identified is 227, with the largest number of votes (47) cast in the 2008
General Election.


Granted 47 votes in an election is only one county, but the "100,000 currently" claim seems iffy. Esp since the reason we know about it is from non-citizens coming forward and telling them. and these people deregistered.


Given that we only know of cases where non‐citizens have self‐reported their ineligibility, it is
likely that many thousands remain registered to vote in Pennsylvania.

It is far too easy to register to vote ... an example: my wife moved here 50 years ago from Portugal ... she has never applied for US citizenship, it's complicated but she if she became a citizen then we would lose the right to maintain a residence in Portugal ...

over the years, many people have tried to register her to vote and always told that her not being a citizen of the US was "not a problem" ... she hates politics anyway so she always declines ... 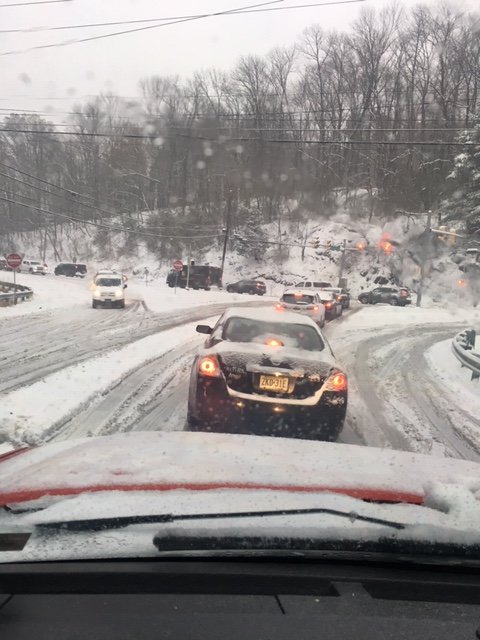 So, we had our first major snow in Pennsylvania and, as it turns out, every road that I took to get home was gridlocked.

Now PennDOT, the main topic of my original post, is responsible for clearing the roads.

And all this happened the day after the post?

I don't think so.

Friends, we are truly on the other side of the looking glass.

it's because all those illegal aliens don't know how to drive in the snow. (It's probably politically incorrect to say that though)
T

deirdre said:
it's because all those illegal aliens don't know how to drive in the snow. (It's probably politically incorrect to say that though)
Click to expand...

they don't know how to even drive here in sunny Miami ... the roads are maddening ...

Todd Cee said:
they don't know how to even drive here in sunny Miami ... the roads are maddening ...
Click to expand...

How do you know which bad driver is one of them rather than one of us?
You must log in or register to reply here.