“Wisps of light” over Penrith​

I think this is an interesting example of how difficult it can be to capture an unusual sight.

Last night we were driving north on the M6 (UK). The weather was somewhat foggy, with low cloud, around 10-12 degrees. From around 21:30 both me and my front seat passenger saw lights in the sky. They appeared to be above us and in front of us for around 10-12 minutes of our journey.

We filmed it on two iPhones simultaneously (through the car windshield, while moving). Both iPhones are the same model. Our film was awful, dark, mostly out of focus and from what I can tell didn’t show any of what we could see with our own eyes.

My passenger thought they looked like “wisps of light” a bit like the Northern lights. I thought it looked like a rotating sky laser system or powerful torch lights reflecting off low cloud. There were groups of lights that swung around in formation, grouped then scattered.

As we were travelling around 70mph and could see this for over 10 minutes and - so at for at least a few miles, it became more puzzling because we kept expecting to drive past a well lit stadium or obvious source of the lights, but we didn’t.

The lights were synchronous in their patterns moving around the sky in front of us and appeared somewhat like the Arabesque or Flurry screensaver on a Mac. They eventually abruptly ended like they’d been switched off.

Blackpool is currently in the middle of a festival of light. There are also light shows at Morcombe. Both were far behind us at that point on the road. The lights always seemed to be above and in front of us. (If it was some kind of rig on a vehicle in front of us we didn't stop long enough, around 1 minute, to totally discount that possibility).

We discussed it right afterward but it presented an interesting problem because we couldn’t capture it on our phones. We couldn’t really agree on how many lights we saw. I thought upwards of 50 (I was driving) but my passenger thought maybe half that number. Yet we both saw the exact same thing.

What did we see?

The original videos with their location details can be downloaded here. Ignore the obvious bokeh and glare from oncoming cars, everything we were seeing was well above the road, and visible when not looking through the windshield.

Staff member
I'm not sure there's much that can be done if they did not show up on the video. Could you maybe draw in a single frame what it looked like?

FYI, almost new moon last night, with no obvious aurora, so unlikely to be explained by either of those.

We've tried adusiting the videos every which way and there's just no usable info in them. We both had a go at annotating a frame by hand. As you can see the tonality was very close to the black of the sky, but still distinct to the eye, just not visible on our phones. We took our first photo (with nothing on it at 21:27 and the last at 21:40).
At times it looked like when you see oncoming headlights scatter through the fog and the median guard rail to make flickering shafts of light, except it was all up in the sky and moved from left to right of our field of view.
Passenger 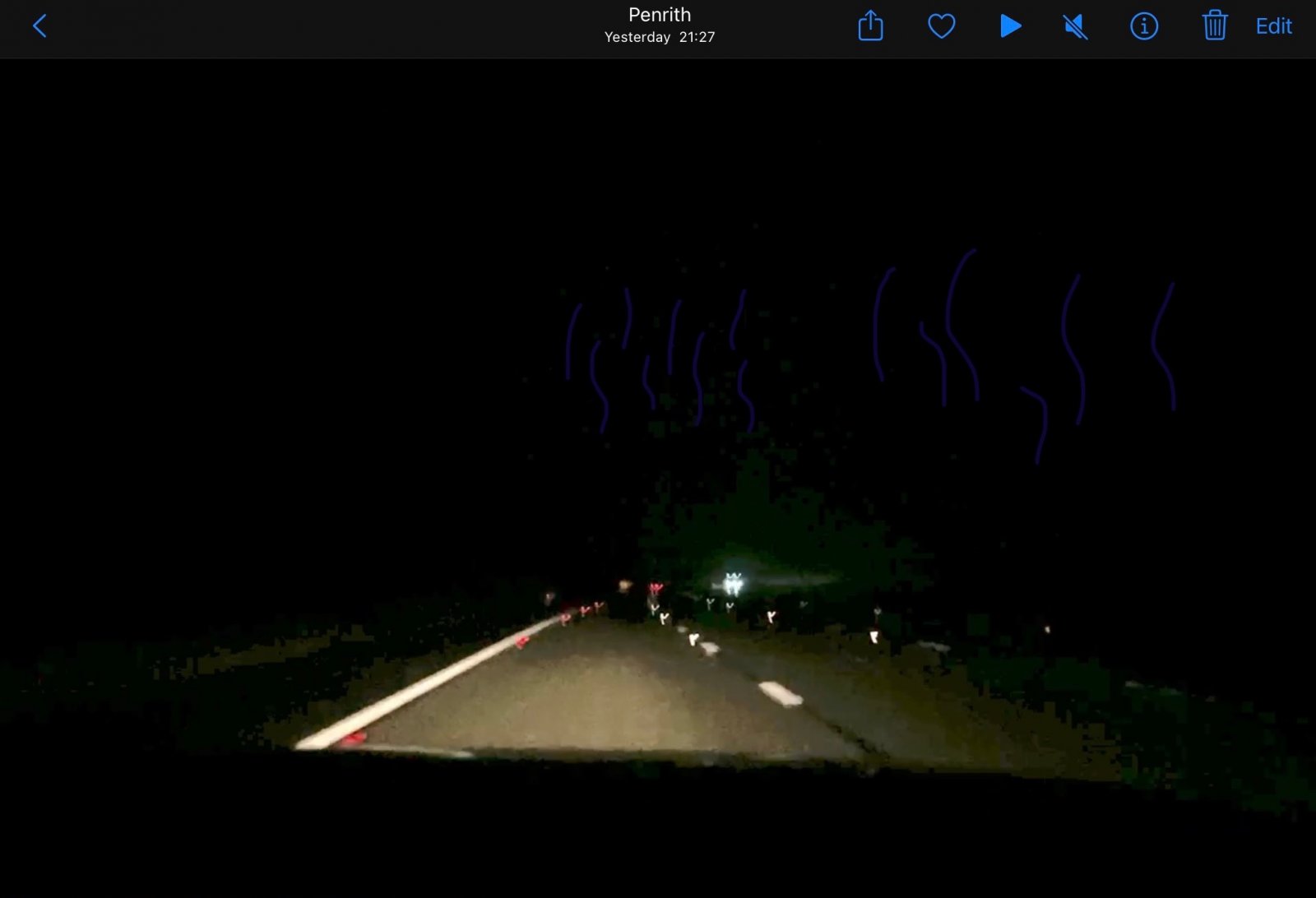 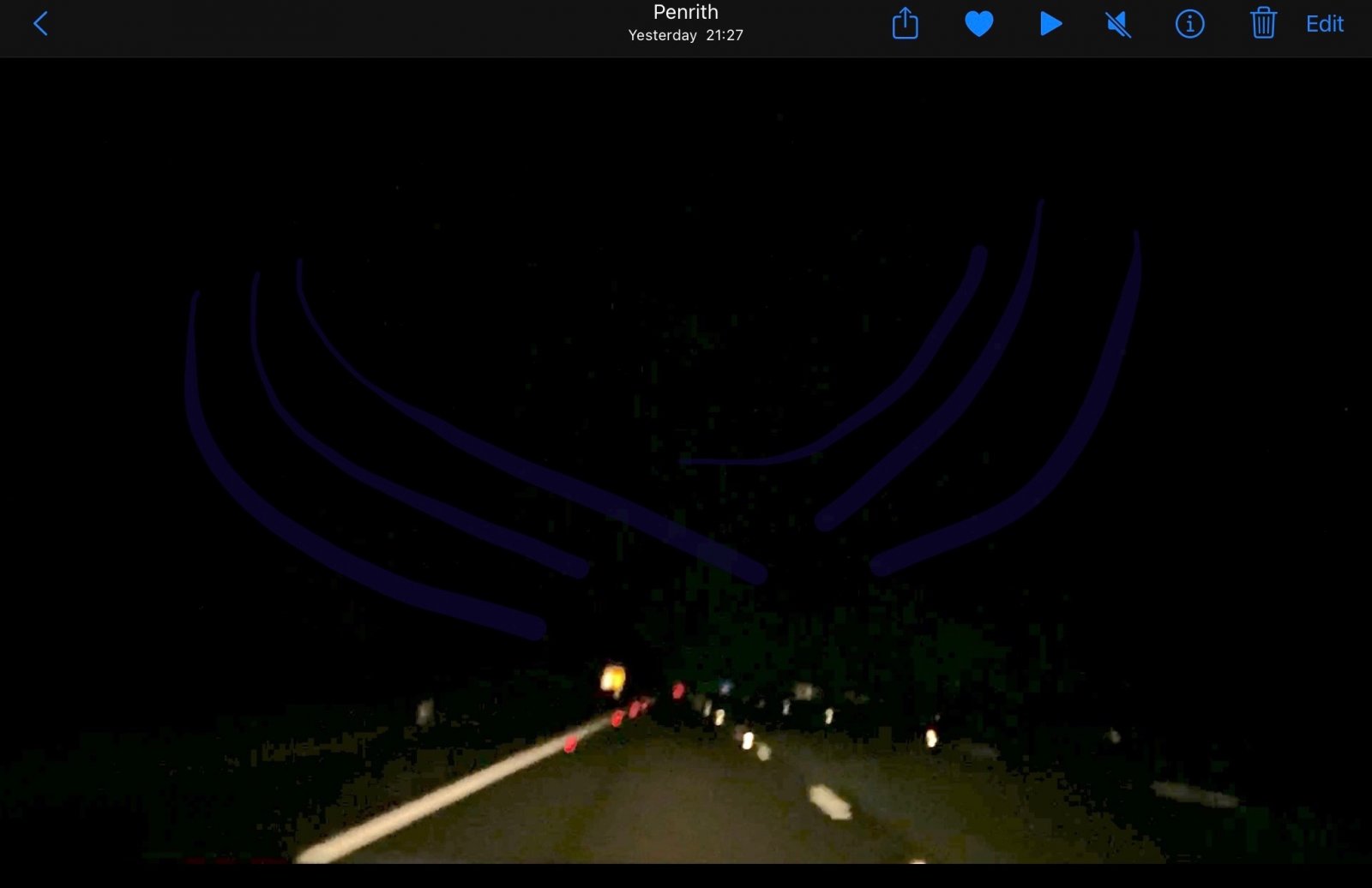 Update: I think it must have been connected to Carlisle City of Lights - which was apparently held over the weekend (Oct 21-23) and involved special illuminations of historical landmarks. Carlisle would have been around 30km directly ahead of us.
Last edited: Oct 24, 2022

It was the Carlisle City of Lights. With many powerful blue lasors. A show finished at 9:40pm. That stretch of the M6 is typically very dark with few street lights, that combined with the low cloud must have been perfect conditions for a weird effect from quite a distance.
There are a few other people on Twitter who also saw it and were equally confused.
Some better images. 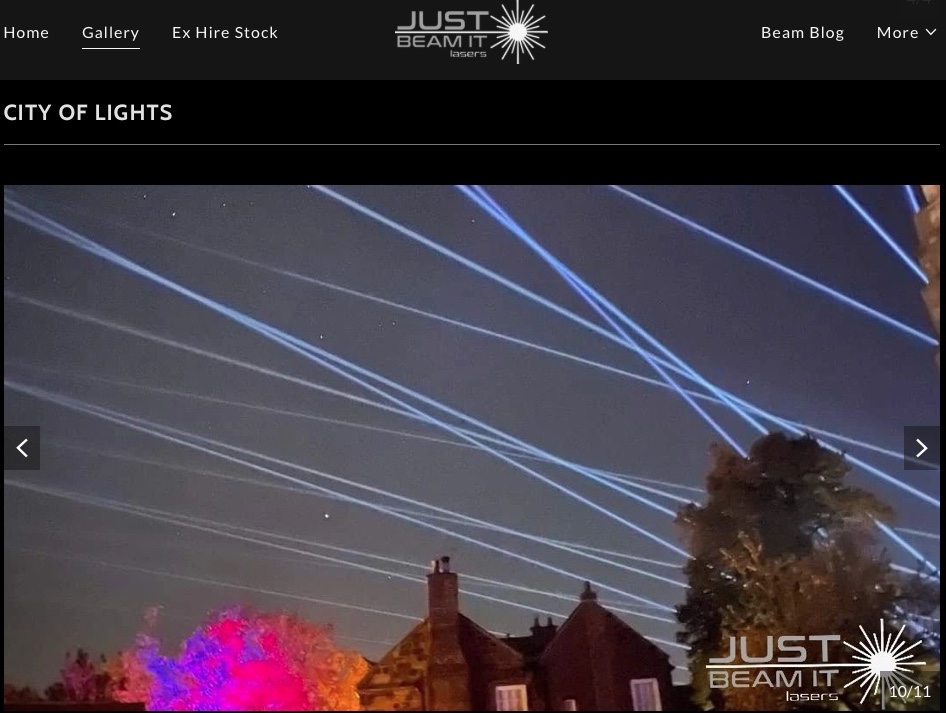 Just adding this because this short video I just made was essentially the same effect in the sky that we saw. This is a laser show happening now somewhere in London. (Short film below). The one we saw was more confusing to look at because were driving towards along a dark stretch of motorway directly towards it yet didn't feel like we were getting closer to the source. The movement of the lights was pretty much constant for the whole 10-15mins.

Topbunk 2.0 said:
Just adding this because this short video I just made was essentially the same effect in the sky that we saw. This is a laser show happening now somewhere in London. (Short film below). The one we saw was more confusing to look at because were driving towards along a dark stretch of motorway directly towards it yet didn't feel like we were getting closer to the source. The movement of the lights was pretty much constant for the whole 10-15mins.

Are you sure it was lasers? I've seen that kind of effect on the underside of clouds just from conventional incandescent lighting.

FatPhil said:
Are you sure it was lasers?
Click to expand...

Yes. It was the Tower of London laser show, 10km from my position. The lights in Carlise we saw from over 30km away.
You must log in or register to reply here.

A
"UFOs" At Loch Ness, and London [Reflection, and Contrail]